In Part One, I discuss the The Alignment System as a tool for a more nuanced understanding of duality. If we simply view world events from a single axis of duality, Good vs Evil, Light vs Dark, Order vs Chaos, White Hat vs Black Hat, I believe we’re missing a more complete understanding of the world around us.

In Part Two, I explore the Alignment System in greater detail, using the original Star Wars trilogy as a guide to show why this system is relevant for us to understand our current world.

In Part Three, I’ll examine the Alignment System’s relationship to spiritual polarity and The Law of One.

The nature of these alignments is that they are not permanent. Individuals can and do evolve from one alignment to another alignment, over the course of one lifetime, or over the course of many lifetimes. The ultimate cosmic goal of this duality dance, at least acording the The Law of One, is to move back into divinity and the True Neutral alignment.

In the course of the original Star Wars trilogy, Luke Skywalker undertakes The Hero’s Journey. This is reflected in his path through the Alignment System. He transitions from Lawful Neutral, as a dutiful boy doing his chores on the planet Tatooine, working on his uncle’s moisture farm, to Lawful Good, as a member of the Rebel Alliance who destroys the Death Star, to Neutral Good, when he trains with Yoda to learn the spiritual principals of the Force, slipping back to Lawful Good, when he prematurely leaves his training to save his friends and rejoin the rebellion, finally transitioning toward True Neutral, when he decides to see the good in his father, Darth Vader, and bring him back to the Light Side.

I suspect that every level of consciousness is intrinsically subject to different aspects of rules, laws, or social order, from 2nd Density animal consciousness which is pre-wired for instinctual behavior and social conduct, to the Angelic realm, which is subject to laws of Neutrality, freewill, and non-interference, which requires us to ask for assistance before assistance can be given. As we climb the ladder of consciousness, we become more aligned with Divine Law in an organic state of neutral (non-judgmental) Oneness. Thus I feel this intrinsic universal order/structure begins to feel less like Law, and more like Love.

At the highest level, the rejection of Divine Law, or Divine Love, which is an organic state of Neutral Oneness, results in layers of separation, duality and polarity, which is the foundation of our entire material universe.

Thus to hold a personal religious conviction that Divine Law intentionally and willfully punishes or excludes any soul from Divine Love is to be ensnared in the distortion of a duality trap.

Yes, there are two paths you can go by,
But in the long run,
There’s still time to change the road you’re on,
– “Stairway to Heaven,” Led Zeppelin

Since some people have difficulty with the alignment names from The Law of One, a better way to understand them might be to call them the Service-to-Others/All/One path, and the Service-to-Negative Ego Self path. 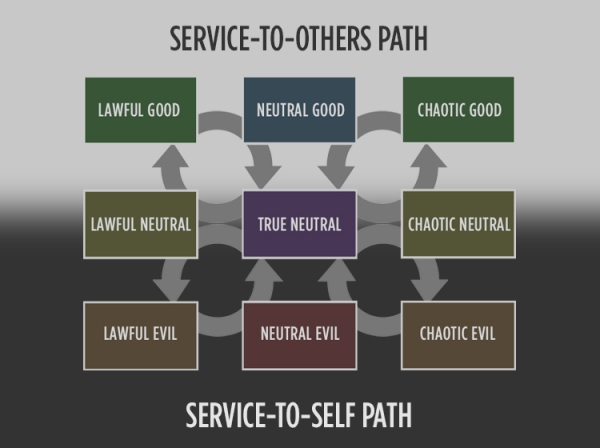 In the diagram above, we see four primary paths back to the True Neutral alignment. (While these may be considered the major highways most souls would take, this doesn’t exclude the possiblility of more indirect, personalized, off-road paths.) The upper two circuits make up the Service-to-Others path. The lower two circuits make up the Service-to-Self path.

The Law of One teaches that both the S-T-O and S-T-S paths eventually merge back intoTrue Neutral, not in our current 3rd Density experience, but only in a 7th-8th Density experience. I understand this may feel contradictory, as the S-T-S path is considered to be pure evil. This is not an easy transition for S-T-S to make, when they reach the pinnacle/dead end of their knowledge and wisdom and realize that their spiritual separation from Source Creator is no longer serving them. Few negative-oriented entities make it this far, when for example, one significant earthy incarnation could serve to clear enough karma to flip them to the beginning of a S-T-O path.

Darth Vader’s journey is about as good of an example as we are likely to find to illustrate this process.

This diagram illustrates the rigid hierarchy of the Service-to-Self path in their ultimate quest for global domination in 3rd Density. It should be noted that this is not a NEW system, as it also represents the basic structure of society at the height of the Roman empire.

The Neutral alignments on the bottom, both Lawful and Chaotic, would make up the largest block, representing those considered to be slaves, resources, or property. They would be encouraged not to question their captivity.

Under this scheme, to maintain a S-T-S rule, any good/positive alignment would have to be either subjugated, converted, or eliminated.

The Chaotic Evil alignment would make up the second largest block. They would be responsible for directly handling and controling the slave population.

The Lawful Evil alignment would make up the third block from the bottom. They would be the elite class that would reap the “rewards” of both slaves and handlers.

Making up the capstone of the pyramid would be their revered masters, the Neutral Evil alignment, who benefit from and feed upon the entire system.

According to Ra Material, the Earth has a very different destiny.

At some point in the evolution of our planetary and human consciousness, a new 4th Density Earth will emerge, as a separate dimension or timeline. According to the Ra Material, upon spiritual graduation, there will be a 3-Way split for all incarnating souls. In the chart above, I have split the Alignment System to best represent exactly what Ra was describing.

Those on the Service-to-Others path will ascend to the new 4th Density Positive Earth (or timeline). According to the Ra Material, a soul only needs to attain 51% of the Service-to-Others to make this graduation, which basically means that their soul must be evolved just slightly above the Lawful Neutral or Chaotic Neutral alignment.

Those on the Service-to-Self path will ascend/descend to a new 4th Density Negative planet (or timeline). According to the Ra Material, a dark soul needs to attain 95% of the Service-to-Self (or 5% Service-to-Others) to make this graduation, a very intense level of self-interest, or what one might consider to be pure evil.

17.33 Questioner: Why is the negative path so much more difficult a path to attain harvestability upon than the positive?

Ra: I am Ra. This is due to a distortion of the Law of One which indicates that the gateway to intelligent infinity be a gateway at the end of a strait and narrow path as you may call it. To attain fifty-one percent dedication to the welfare of other-selves is as difficult as attaining a grade of five percent dedication to other-selves. The, shall we say, sinkhole of indifference is between those two.

According the the Ra Material, those souls who have not yet fully committed to an Alignment or polarity path will end up repeating 3rd Density on another planet (or timeline) for another full cycle. This makes up the largest section of the Alignment diagram, which includes all of the Neutral alignments, as well as a good portion of the Lawful Evil and Chaotic Evil alignments who were not able to attain 95% Service-to-Self.

From 4th Density, the gradual pursuit of a True Neutral alignment makes up the bulk of the work required to ascend to the 5th, 6th, and 7th Densities.

According to the Ra Material, the S-T-O and S-T-S paths ultimately return to a True Neutral alignment upon entering the 8th Density (and beyond.)

As we can see, a study of the Alignment System seems to be quite valuable in understanding some of the concepts in the Ra Material and “The Law of One.”

David Nova is the author of the metaphysical fiction series “Season of the Serpent.”  He is a truth-seeker, a Wanderer, a blogger, and was the moderator of Deus Nexus: Messages For An Entangled Universe.

This article is offered under Creative Commons license. It’s okay to republish it anywhere as long as attribution bio is included and all links remain intact.

SHOW YOUR SUPPORT FOR THIS BLOG BY LIKING, COMMENTING, AND SHARING.

This site uses Akismet to reduce spam. Learn how your comment data is processed.